It’s difficult to imagine the situation at U.S. West Coast terminals getting worse, but we’ve seen unbearable conditions spread across the terminals in recent days. I’m not just blaming the weather either.

Here is a picture provided to us yesterday by a local trucking company showing the GPS tracking of one driver as he attempts to wait in line to pick up a container at Ports America terminal in Oakland. 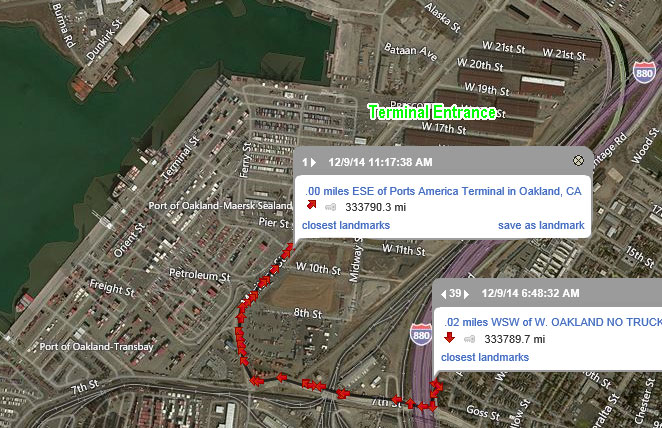 The driver started waiting at 0648 and as of 1117 in the morning, he was still 0.4 miles from the entrance to the terminal (moving 0.9 miles in the span of 4.5 hours). This does not include delays once the driver gets into the terminal. Drivers are regularly getting closed out of the terminal without getting the container the were scheduled to pick up, Truckers are falling way behind in terms of the containers they have accepted to pickup and deliver.

The issues at the “problem” terminal have spread across to what we had considered to be “better” terminals. In Oakland, BENT terminal is also experiencing a massive buildup of containers forcing the terminal to place incoming containers into closed off areas for many days. This is not news for those having to deal with the congestion issues in Los Angeles/Long Beach or Seattle/Tacoma.

We have been scrambling to find available truckers the past few months, but conditions have gotten to the point where there just aren’t drivers available. Many trucking companies are not accepting any new delivery requests for the remainder of December.

There is no end in sight as congestion continues to surge even as we are supposedly coming to the end of the peak shipping season.