Changes at the Port of Oakland

The port of Oakland is still adapting to the closing of Ports America terminal. Those who ship in and out of the port of Oakland have likely noticed the port congestion, especially at SSA terminal, which currently handles roughly 67% of containerized cargo shipping through Oakland and remains the biggest problem terminal.

Truckers have already become accustomed to long wait times at SSA terminal. In the month of May, an ugly new problem reared its head. We experienced two instances where containers were held for a Customs x-ray examination. However SSA terminal did not make the containers available for examination until after the Last Free Day (LFD). In both instances, we requested the terminal as well as the steamship to extend the LFD. Only in one instance were we successful in getting the LFD extended. In the other instance, the importer was forced to pay over $800 in demurrage fees at the terminal. In talking to others in the community, we are not the only ones who faced this problem.

SSA and the port of Oakland is actively looking for solutions to help alleviate the congestion. Here is a list of recent changes and as well as planned changes to be on the lookout for:

1.) Appointment System for picking up containers at SSA
One step to bring relief to the long waits at SSA terminal is the creation of an appointment system. As of June 6, 2016, truckers must now make appointments to pick up most inbound containers. Since SSA only gives out a certain number of appointments for each hour, it was expected that the appointment system would help alleviate the problem of having truckers wait long hours outside the terminal.

It should be noted that ETS (Evergreen’s terminal) has also been experiencing issues with limited numbers of appointments available. We have encountered a few instances in recent weeks where the earliest appointment available to pick up a container as after the LFD. Fortunately in most of these instances, Evergreen has been willing to extend the LFD to match the container appointment.

2.) SSA Oakland to begin offering FULL night gate operations
SSA Oakland has in the past few months opened up night gates in a very limited capacity for certain container moves (reefer) only. Starting June 27th, SSA will begin a 90 trial run of full night gate operations open to all container moves. This second shift will operate from 6pm – 3am. In order to operate the night gate, SSA terminal will begin charging a $30 flat fee for each container (import/export) for full services. This fee will be charged for all containers, whether the container is picked up during the day or the night shift. Importers who book containers to SSA Oakland terminal should expect to see this fee for their containers that arrive possibly even next week.

Hopefully, the night gate will help alleviate the congestion at SSA terminal.

We have been waiting to for over half a year for news that steamship lines will pull vessels from rotation. As those in the importing community have probably noticed, ocean freight rates have plummeted to historical lows in the past year. The carriers have been proclaiming for a while now that the low rates are unsustainable.

Two of the the Korean carriers (Hyundai Merchant Marine and Hanjin Shipping) have absorbed massive amounts of debt with much speculation of possible bankruptcy. A recent deal looks like Hyundai might have temporarily staved off bankruptcy. Other carriers are suffering as well.

We therefore have finally heard the first news of carriers committing to some vessel reduction:
The G6 group of carries have announced that they will withdraw the CC1 string of vessels starting from mid-June. The CC1 string serves Asia-U.S. West Coast ports. However keep in mind that the G6 will be bringing back the CC2 string to replace the CC1 string. CC2 vessels actually have larger capacity. Therefore this is a net gain in capacity.
The Ocean 3 group will withdraw the AA3 service from Central China to the U.S. East Coast ports.
Will these changes place enough pressure on supply to finally push freight rates up? It’s too early to say.

Here is a chart from the Alphaliner weekly magazine that shows the number of idled ships as well as the idled TEU capacity. 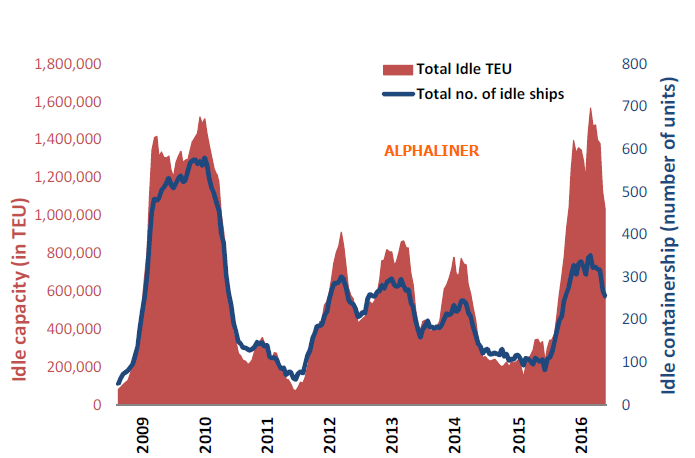 If you have any questions, feel free to contact me.